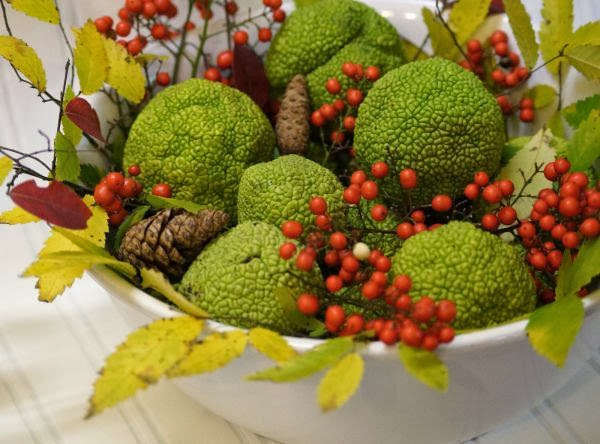 The far border of the small pasture next to the house and barn on our farm in Illinois was marked by a hedge fence.  The hedge trees were growing (did someone plant them that way?) close enough together that even small calves could not push through the gaps between the trees.  Occasionally I was required to trim out branches that were hanging too far down.  Cutting the branches with a bow saw was hard work. Especially for someone in their early teens.  The wood was very hard.  Later I found out that it is the densest wood of any tree in the United States. Hedge trees have thorns making trimming them more challenging.  This was my first exposure to Osage orange. The Osage orange tree is native to the southern plains area of parts of Arkansas, Missouri, Texas, Louisiana and adjacent states.  I did a bit of research and found that Lewis and Clark brought the tree east.  Maybe the western Virginia osage trees came via Lewis and Clark.

I wanted locust boards for raised beds in my Virginia garden. My supplier didn’t have enough eight inch or wider locust boards.  But, he said, he had half a dozen hedge boards.  However, the price was nearly twice that of the locust.  I was about to leave when he said he had the hedge boards a long time and was unable to sell them.  But, I could have them at the same price as the locust.  I remarked how unusual it was to find ten-inch hedge boards, ten feet or more long.  The tree was standing in the middle of a field, he told me.  It was not in a fence row as had been most of the hedge trees I had seen previously.

When I told a former Kansas resident about the find, he said he had helped pull out fence posts that had been in the ground fifty years. The underground section of the post was nearly the same diameter as the above ground part.  Rot had little effect on the hedge wood.  In Virginia a friend had a line of osage trees.  Son Nathan and his wife, Karen thought a good use of the fruit would be to roll them down the steep, two block-hill in front of our house to see if they could hit the baseball field fence at the bottom.  After one or two rolls, they realized that, even though the streets were then empty hitting anything that might come along would be serious.  Maybe the oranges were worthless. 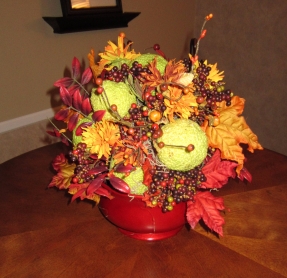 Not long after that, a visitor from Ohio said that they were selling hedge balls at their Mennonite Relief Sale (held to raise money for disaster and famine relief) as an insect repellent.  You can

Google the results of experiments attempting to validate this.  Even so, I found an ad on the Internet for hedge balls for $3 each as spider repellents!  So, I collected a box of oranges to take to our Virginia sale the first weekend in October.  I do not remember how many we sold at ten cents apiece.  The next fall I saw a vase ad in a furniture store flyer with three Osage oranges.  The vase was listed at $120!  We raised the price of our oranges.

Several years later the popularity of the hedge balls increased as people wanted them for fall arrangements.  The price went up to twenty-five cents each.  So, whether apples or oranges, the osage tree fruit clearly have value.